I'm a Scientist: Supported by Wellcome and UKRI
Skip to content

About I’m a Scientist

I’m a Scientist is like school science lessons meet the X Factor! School students choose which scientist gets a prize of £500 to communicate their work.

Scientists and students talk on this website. They both break down barriers, have fun and learn. But only the students get to vote.

This is the Ecology Zone. It has a range of scientists studying all different topics. Who gets the prize? YOU decide! 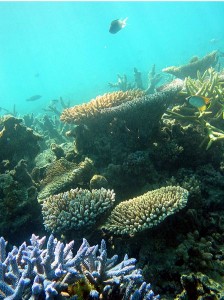 Coral reef system: A coral reef is an excellent example of an ecosystem; all parts rely on other parts. Small environmental changes, such as concentrations of carbon dioxide in the water, or temperature, can have big affects on the ecosystem. [Image: Wikimedia/PLoS]

Ecology looks at the relationship between an organism and its environment. This is known as the ecosystem, which includes everything that can be seen in a location; the plants, the animals, even the buildings, everything.

Scientists who study ecology look at the roles played by each part in an ecosystem, and the affects of each part. This can be through looking at the plants the animals eat, the different animals which are hunted for food, or even by looking at the amount of poo produced by animals; this is often used to fertilise the plants.

Humans, like all other animals depend on the Earth for everything, and everything on this earth depends on something else. By understanding ecology it is possible to predict how our actions will affect the environment, and make sure we don’t upset fragile environments in which some animals live.

Some ecologists study conservation biology, looking at ways to sustain the resources of the Earth for future generations.

Ecosystems can regenerate and adapt, but some scientists think disturbances by humans have pushed nature too far. Human activity has made a large number of species extinct, and has changed the Earth’s climate, causing change in a wide variety of ecosystems.

Teachers don't need to book, and students are free to drop in and talk to the scientists.. If they have any burning questions or haven't yet experienced a live chat.